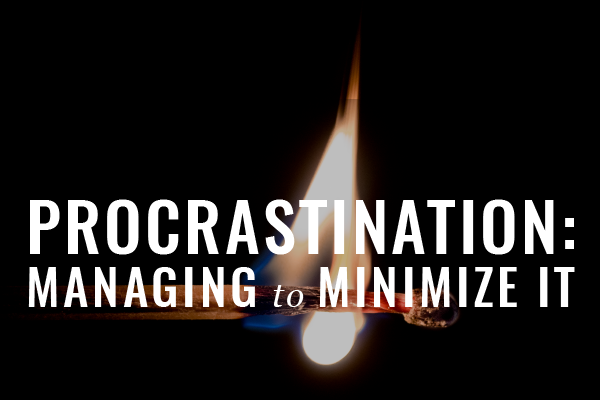 In this, the fifth in our series on time management (parts 1, 2, 3 and 4 are all also available), we’ll address . . . okay, procrastination. (Deep sigh) Maybe I should watch ‘Mad Men’ or something instead? Okay, alright.
Everyone Else Is Doing It
Procrastination is a wholesale, human issue: pretty much everybody engages it. Roughly one quarter of the population are chronic procrastinators; but, nearly 100% of adults are occasional procrastinators. Even so, both those statistics seem low.
Procrastination is mostly a psychological construct: you’re avoiding doing something you don’t necessarily want to do; and, you’re doing something else — usually something that provides a more instant reward. For the most part, our decisionmaking tends to favor instant gratification over prolonged outcomes. That’s only natural. Lawyers can tend to procrastinate because their work is often arduous, or, frankly: boring. Other motivators (or, demotivators), for procrastinating lawyers especially, include: perfectionism (often the enemy of the good, it is said — and, definitely the archenemy of the obsessive compulsives); feeling overwhelmed (yeah, attorneys have a heavy workload); indecision; and, stubbornness — though, of course, that is not an exhaustive list. Generally speaking, while attorneys are under a good deal of pressure from clients and courts, they often bring the heaviest pressures down upon themselves, which ends up exacerbating a number of the causes of procrastination outlined above.
You Can Do It Less
But, even if procrastination is entrenched, that doesn’t mean that we can’t decrease how often, and to what degree, we procrastinate. Certain of the strategies we have discussed in prior iterations of this subject matter, including blocking time and making checklists, can focus us, and reduce the amount of time we are off-task. In a similar vein, and also relating to prior posts on this subject matter, you can strive to eliminate unnecessary, or repetitive tasks. This may take some delegating in a small firm environment; but, for solos, who saddle the horse and ride it, the process, if it even exists, may be easier to goose. The creation and maintenance of workflows, for example, will end up by eliminating unnecessary tasks, and streamline the process encircling those that remain. If you are able to invert the common hierarchy of need, and put off some level of present satisfaction, focusing instead on long-term goals, outlined via a business plan, or some other medium, then that is another powerful hedge against wasting time in the short-term. However, if you can’t put enough pressure on yourself to qualify long-term gain over short-term satisfaction, get some help: find a procrastination buddy — get somebody who can kick you in the butt, when you need that, to get in gear. Don’t worry, you get to return the favor: these relationships work best when they’re reciprocal. Perhaps the best way to beat back procrastination is to apply the two-minute rule: If you can do something in two minutes, just do it right then. This theory is advanced by the fact that most of the work that folks avoid is not especially difficult to do. Getting small tasks done that you would otherwise avoid means that you will have more time for the big tasks that you really want to do, or that are more advantageous for the long-term. My colleague at Lawyers Concerned for Lawyers, Shawn Healy, offers the following great example, based on the two-minute theory: Say you want to start running; but, you can’t force yourself into committing to the habit. Well, go after it in stages. It takes less than two minutes to get off the couch: do that. It takes less than two minutes to grab your shorts, t-shirt and sneakers: do those things. It takes less than two minutes to put those items on your person: so do it. It takes less than two minutes to walk outside: just do it! By the time you get outside, with all of your running gear on, it would just be silly NOT to go for a run. (New England winters excluded — get a treadmill instead.)
It’s Not All Bad
This is not to say that procrastination is valueless. Oftentimes, people procrastinate because they need a break, which they subconsciously recognize. So, another good trick for avoiding procrastination, especially for lawyers, is taking at least one full day off from work each week, to give yourself time to rest, and recharge.
Procrastination especially when the focus is on procrastinating from performing work-related tasks, can be healthy, as alluded to above, because it forces upon us breaks. What we do within those breaks can be highly beneficial for our mental well-being: Read a book. Bake a soufflé. Go for a run. Get yourself well-rounded again.
Just because the Renaissance is all over doesn’t mean you can’t be a Renaissance man (or woman!) — just give yourself the chance . . .
Liner Notes
There’s something in the way.
‘Grace’ by U2